We would like to thank everyone who contacted us to say good-bye and to wish us well. It was wonderful to hear from all of you, and we are thrilled to have had so many wonderful supporters.

Two individuals took it upon themselves to offer their time and energy without compensation to improve the final offering from Flesh Field, and we can not thank them enough for their selfless contribution.

Nathaniel of the band Pheromone in Russia and Konn Lavery in Canada each contributed their skills to help us improve the quality of the internet release of the demo/instrumental tracks from Tyranny of the Majority.

Nathaniel has mastered the instrumental tracks, improving the sound quality ten fold. The tracks are louder, thicker, and much cleaner.

Konn produced artwork for the album, including a cover, booklet, back tray, and compact disc design.

Konns explanation of the artwork:

With the cover design I wanted the prime graphic to differ from previous Flesh Field album designs so I did some reading on the term Tyranny of the Majority and found images representing the term through a classic weight scale. Based on that idea, I used a clean/lots of white photograph with a weight watching scale (also similar in shape to a face watch) in it. The image also has the arrow within the normal range and normal is best represented by a majority ruling.

I kept the overall design black and white which places it in a timeless setting, which seemed fitting for the band Flesh Field and the albums title.

As for the other graphical elements (technical details, and black blocks) / font choices, I wanted to keep it in similar line to the previous branding of Flesh Field to keep consistency with the albums (Primarily Belief Control, Strain and the internet EPs). The splatters were inspired by the one wall paper background on the Flesh Field site and found that the contrast of the organic splashes and mechanical tech pieces blended well to give the album differentiation from the previous album covers.

Nathaniel and Konn: Thank you so much for all of your hard work! 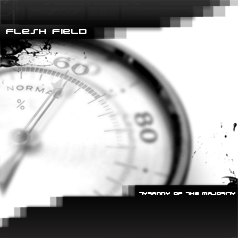 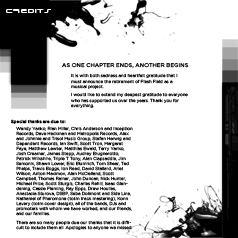 AS ONE CHAPTER ENDS, ANOTHER BEGINS

It is with both sadness and heartfelt gratitude that I must announce the retirement of Flesh Field as a musical project. As explained in previous updates, collaboration between Wendy and I has proven difficult due to distance, as has finding time to devote the attention to the project that it deserves. This inability to properly focus led to the creation of tracks that I do not view as a significant progression or improvement over our past work.

That said, I have chosen to make the instrumental versions of the tracks from Tyranny of the Majority available to anyone interested, as promised in our last update. Please keep in mind that these are unmastered, so volume and sound quality is lacking.

I shall continue to compose music, and am considering a new project. I will keep you updated.

As promised, here are the tracks:

I would like to extend my deepest gratitude to everyone who has supported us over the years. Thank you for everything.

There are so many people due our thanks that it is difficult to include them all. Apologies to anyone we missed.

Thank you all for the great times and the memories.

As one chapter ends, a new one begins.

To anyone who has sent an email to the info@flesh-field.com address within the past year and has not received a response from us: Please accept our sincerest apologies. We had the flesh-field.com address set up to forward to a different address that we stopped using ages ago. We have updated the forwarding information, and we should now be able to receive and reply to email.

TYRANNY OF THE MAJORITY STATUS UPDATE

Ok, here's what's up....The tracks slated to be on the next Flesh Field album were written in a time period spanning mid-2006 to 2009. I am unfortunately not really happy with any of them...at all. The production is lacking, and the tracks themselves are not a progression or an improvement over our past work. Additionally, Wendy and I now live in different states, and remote collaboration hasn't been possible. Between graduate school and careers, Flesh Field has become a low priority. So low, in fact, that I am considering retiring it, but a final decision has not yet been made. Should I choose to retire it, I will (in all likelihood) continue to write music, either under a new name, or simply as a composer. Either way, tracks would probably be made available in some fashion to those who want them.

TYRANNY OF THE MAJORITY STATUS UPDATE

The music for Flesh Field's fourth full-length album has been completed, although vocals still have to be written and recorded. The tentative tracklisting is as follows:

One or two additional tracks may be included if they can be completed within a reasonable time frame.

Flesh Field has released much of its back catalog dating back to 1999 on its Website for free. We realize many (if not all) of these tracks are available for free download elsewhere, but we figured releasing everything in one place may be a bit more convenient. Available material includes the Viral Extinction album (1999), The Redemption EP (2000), the Belief Control album (2001) as well as various compilation tracks and remixes. Some tracks could not be made available due to copyright issues. Check out the "Internet Releases" section.

We feel that we have moved beyond our old material, and hence have no desire to re-issue or re-release it in CD format or on ITunes. Yet we do recognize that there are some who are still interested in it. This is why we have made the old material available on our Website.

Flesh Field has contributed an unreleased instrumental entitled "Detritus of Reason" (written initially for Strain but cut from the album) to the "Electronic Saviors: Industrial Music to Cure Cancer" compilation, compiled by Jim Semonik.